“The life flowing among the bodies of water and the reeds”

The Paludi di Ostiglia Nature Reserve represents a rare example of raised marshland, the last testimony to the huge Veronese Valleys, a vast marshland system – over 30,000 hectares – whose drainage began around 1850, but was not finished until the 1970s.

The wilderness area, set up in 1984, extends over 120 hectares in the town of Ostiglia, on the border with the Veneto region. It hosts 175 species of birds, as well as some particularly rare and prestigious habitats which have led to recognition on a European (the Reserve is part of the Europe-wide ecological network, Natura 2000), and even worldwide level (the Paludi di Ostiglia are one of the 51 Wetlands of International Importance in Italy). Due to its importance from a birdlife point of view, the Paludi di Ostiglia are part of the Italian League for Bird Protection (LIPU). Among the most important species are the Italian agile frog, a red frog which lives only on the Po Plain, the bittern and the red heron (two rare reed thicket herons), as well as the western marsh harrier, the viviparous lizard and the wetland tortoise. There is a convenient turf path inside the wilderness area which connects the visitors’ centre to the observation points. The reserve is open and freely accessible on foot or by bike all year round.

It is to be noted that a LIPU operator is at visitors’ disposal, as well as a very comprehensive environmental education program, which for over a decade has been involving the schools of the Mantuan Oltrepò in themes regarding nature and the sustainability of lifestyles.

The Paludi di Ostiglia are connected to the wilderness areas of the Mantuan Oltrepò Parks System by the Parks Cycle Route, and also lie along the Via Claudia Augusta – a cycle path which retraces the route of the Roman road which linked the Danube and Po rivers – and the Province of Mantua cycle route 9. 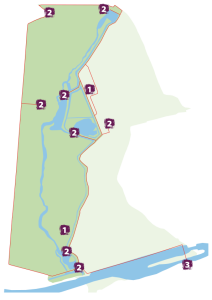 What happens in the marshland through the seasons?